Galxe was adding the Solana blockchain to its existing list of 6 different blockchain ecosystems. It was the first time Galxe was integrating a non-EVM (Ethereum Virtual Machine) chain into its protocol. We wanted to help bring our existing community from the other 6 EVM chains to Solana, by offering some incentives to get started.

The campaign attracted attention and eyes to the Solana ecosystem as a whole. Overall, Galxe helped grow the Solana ecosystem with over 33,400 new users joining the campaign with each unique user trying an average of 5 protocols on Solana. We are also proud to say that 4,826 users completed 10 or more tasks from different partners. 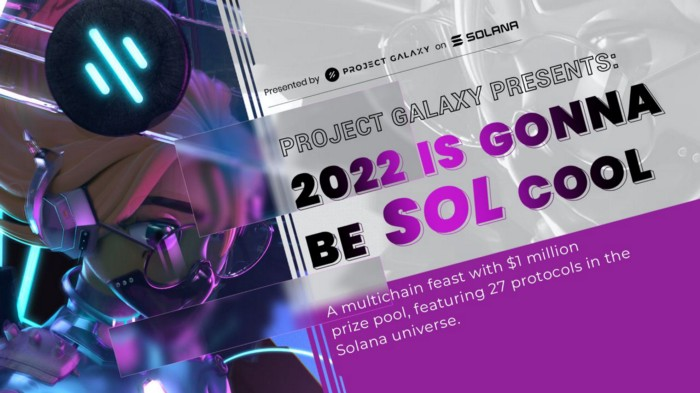 Clover is a one-stop infrastructure platform for cross-chain and decentralized applications.

STEPN is a Web3 running app with fun social and game elements. STEPN motivated it’s participants to move by rewarding them when they downloaded their app, bought an in-app sneaker and followed their socials.

Wormhole’s token bridge enables seamless asset transfers between the 7 supported networks- Ethereum, Solana, Terra, BNB Chain, Polygon, Avalanche and Oasis. The event was a success and helped bring a lot of new users to the platform.

Orca is the most user-friendly general purpose DEX on Solana. It is one of the first AMMs launched on Solana and we strive to provide easy and effective financial tools for everyone, bringing DeFi to the masses.

Ancient8 is building a DAO that develops a community and software platform to enable everyone to play and build the Metaverse while earning rewards.

Francium is a DeFi Strategy Platform on Solana. On Francium, you will find bespoke yield strategies and a decentralized strategy building infrastructure designed and built specially for you DeFi users.

Jupiter is the key liquidity aggregator for Solana, offering the widest range of tokens and best route discovery between any token pair. We aim to provide the most friendly UX for users and most powerful tools for developers to allow them to easily access the best-in-class swap in their application, interface or on-chain programs.

Apricot is a next-gen lending protocol that supports leveraged yield farming on Solana. Their mission is to help users maximize yield while protecting their downsides.

Mobile Decentralized Exchange and Wallet. Users needed to download the app and Stake on slope.

01 is a trade fully decentralized derivatives on a fully on-chain limit order book powered by Serum, with cross-collateralization and cross-margining.

1Sol Protocol is a cross-chain DEX aggregator for decentralized protocols on Solana, enabling the most seamless, efficient and protected operations in DeFi.

Space Runners is the first Metaverse Fashion brand on Solana in collaboration with artists and athletes.

SYPOOL rewarded users with NFTs once they had staked on the Sypool platform. The results speak for themselves:

Zebec, which is a platform that empowers real-time, frictionless and continuous streams of payments asked participants to deposit & stream 10$ worth of SOL /USDC/USDT on its platform.

ScareCity is a collection of 30 unique NFT characters with their own hand-drawn variations, each more scarce than the last, had users achieve tasks via a Gleam Form.

Solend is an algorithmic, decentralized protocol for lending and borrowing on Solana. Solend asked user to deposit and borrow on Solend.Fi.

Genopets is the world's first Free-to-Play, Move-to-Earn NFT game on Solana that makes it fun and rewarding to live an active lifestyle.